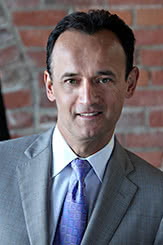 Lorenzo moved to Victoria on August 31, 1991, to commence his practice in Civil Litigation and joined the then Crease & Company, where he worked for ten years, the last five as a partner.

Lorenzo has extensive knowledge and experience in the following areas of law:

Along with endless trial experience, Lorenzo brings to his practice vast personal experience from having lived in numerous countries. He is fluent in Italian, Spanish and has a good working knowledge of French.

Lorenzo is very involved in volunteering. He is active in the Access to Justice pro-bono clinics, which offer free legal advice to people unable to afford it. He was a board member of the YM-YWCA of Greater Victoria for 6 years, for 2 of which he was President YMCA/YWCA of Vancouver Island. He has participated in numerous political campaign at the municipal, provincial and federal level.

Lorenzo is an active board member and legal counsel for The David Foster Foundation.

Lorenzo spends most of his spare time with his fiancée Petrina and his stepsons, Venice & Madae and playing competitive soccer.